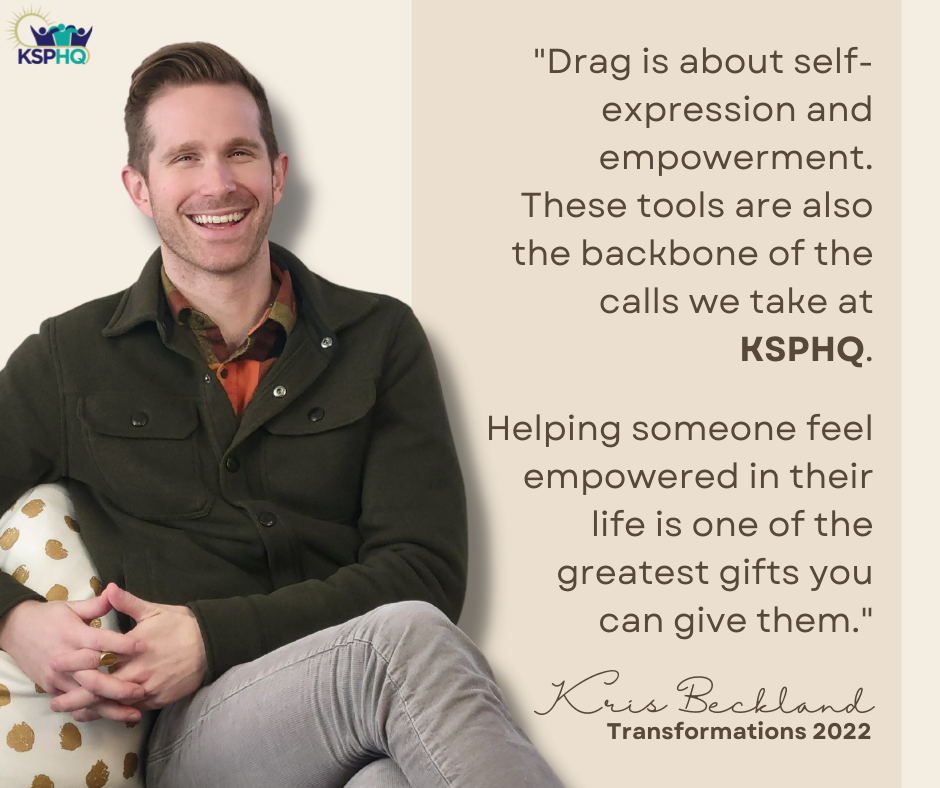 “Being Your Truest Self”: Kris Beckland Takes on Transformations to Support Suicide Prevention
By Michael Hutton

“Being your truest self in public is a bold move,” says Kris Beckland, a KSPHQ volunteer crisis counselor and newly featured performer in the upcoming Transformations 2022 charity drag show. “And, as someone who appreciates drag, the amount of decisions that go into a single performance are staggering. Even just one performance is so remarkable to me.”

Transformations, the upscale charity drag show that combines the brilliance of drag performance with the supportive nature of community and care, will take over Liberty Hall once again on January 29th in downtown Lawrence, KS. This year is quite special for the event, as Transformations celebrates 10 years of drag performance and charity fundraising. “Deja Brooks [the organizer of the event] is Lawrence drag royalty,” Beckland proudly states. “Deja single-handedly made this event more than 10 years ago. Charity has always been the emphasis.”

Though Beckland will take the stage as a featured drag performer for the first time this year, Beckland has gained a wealth of experience and knowledge from his two previous years performing as a backup dancer for his friends as well as attending the Transformation shows for the past seven years.

“It is such a joyous event,” Beckland expresses. “It’s fun to see people who have never done drag before try it out.”

Kris notes that he has a “great team” this year and receives consulting from a host of professional and experienced drag performers through the entire rehearsal process. Beckland also comments that he wants to use his performance to “challenge antiquated expectations of masculinity.”

In addition to his featured drag debut, Beckland also serves as a volunteer crisis counselor for the Kansas Suicide Prevention HQ located in Lawrence, KS. Serving as a volunteer since the Summer of 2020, Kris notes that talking to callers is “one of the most meaningful feelings” he has experienced. “I want to represent KSPHQ proudly,” says Beckland. “I don’t know if I would be half as motivated if I didn’t have a supportive organization behind me. KSPHQ has some of the most empathetic volunteers I have ever known.”

When asked how it feels to perform drag and raise awareness for suicide prevention, Beckland notes that “a part of mental health is handling the weight that others may place on you.”

“Drag is this incredible theatrical artform that allows people to express themselves,” Beckland continues. “Instead of feeling limited, drag enables you to feel free. This artform helps to give voices to communities that are often pressured by societal norms.”

“For example, we know that LGBTQ+ individuals have much higher chances of dying by suicide. Being your most authentic self, especially when it goes against societal expectations, will always typically be met first with shock and outrage. But, it is freeing to shirk off the expectations of who you are ‘supposed’ to be.”

For those attending Transformations for the first time this year, Beckland offers some witty words of advice. “First, the event sells out in less than a minute. There is a very high demand, especially with limited seating. So, show up early.” Kris also suggests that guests eat a good dinner, because “the drinks are a flowing.” Finally, Beckland reminds all guests to embrace the supportive nature of the event. “These dancers are firefighters, fathers, and other men who have probably never been in heels before. That is bravery, and we’re here to support it.”

To learn more about this year’s Transformations charity drag fundraiser, check out their official page on Facebook or email [email protected]. RSVP and save your seat so you don’t miss out!
Learn more and RSVP at ksphq.org/grand_reopening

END_OF_DOCUMENT_TOKEN_TO_BE_REPLACED

Safety is certainly a concept on many people’s minds as we continue to reopen our country in the wake of the global pandemic. This current transitionary period highlights how a crisis, at a minimum, discombobulates us and leaves us feeling out of sorts. Instead of feeling calm and collected during these times, we might be figuratively filling the car with toilet paper or denying the fact that there is a problem in the first place (maybe this analogy is just too literal). The point is that planning for safety doesn’t have to be a reactionary response or an afterthought.

Now, safety planning as it relates to suicide prevention and intervention isn’t the same as getting ready for a global pandemic like a doomsday-prepper, but it does entail the same basic principal: If we thoughtfully prepare and plan for a crisis, then the outcome can be improved and the intensity of the experience can be reduced.

END_OF_DOCUMENT_TOKEN_TO_BE_REPLACED 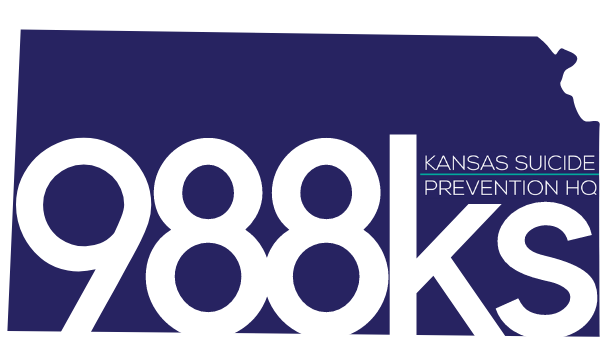 IMPORTANT: T-mobile is the ONLY carrier that currently connects 988 to the National Suicide Prevention Lifeline Network.

988 is not yet available to any other carrier’s customers. As the 988/National Suicide Prevention Lifeline Crisis Center serving all Kansas area codes, we commend T-Mobile/Sprint for quickly enabling 988 services to their customers.

Visit our 988 info page to learn more about 988 or our get help page to learn about how the Lifeline works and how you can get connected.

This month, Survivor of Suicide Loss Day, a New writer, Whit, and GivingTuesday